More than your average print shop. We offer web-based services for our clients. Ask us about it!

Young’s Printing, of Middletown, CT, has announced that the Impressionator, a Middletown native, has returned to save the City and serve clients near and far.

According to president, Daniel Litwin, “A superhero like the Impressionator can deliver several hundred packages, print several hundred-thousand items, and show press proofs in two or even three continents – all in one day. In today’s business climate of impossible deadlines, having a superhero on staff is almost a necessity.” 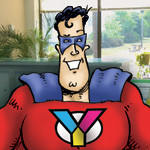 Sources close to Young’s Printing confirm that the Impressionator has actually had a presence at the company since its founding on what is now Wesleyan University’s campus, back in 1885. While historical details are sketchy, the local superhero is said to have fallen ill in the early 1920’s, just after Young’s Printing relocated to its present headquarters on Court Street in Middletown.

The Impressionator was apparently disoriented after the move, and ingested a bad batch of PMS Red 200 ink. Western medicine was no use, and the superhero languished in the pressroom of Young’s Printing, on medical leave, for the next 80 or so years.

Then, in 2005, during a class tour of the facility, a determinted 11 year-old Woodrow Wilson Middle School honors student, Tommy, discovered a cure for the ailing superhero, PMS Green 369, the color wheel opposite of PMS 200. Miraculously, it worked!

“Tommy’s the real superhero,” commented the Impressionator, after his recovery. “I knew that Green 369 was the answer,” Tommy proudly grinned in response. The rest is history. The Impressionator is now off leave and back to full strength!

Yes, we have Covid-19 signage to keep your employees and customers safe. See examples at fastsigns.com/2053.